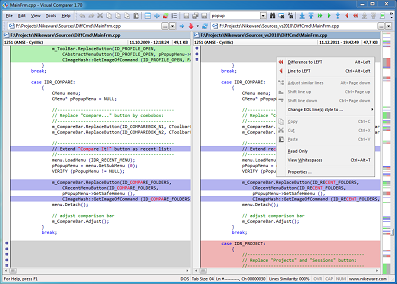 If you’ve been building web projects or software then you can understand how difficult managing these files can become. The process of merging different source code can be very annoying. Visual Comparer enables you to compare text files side by side and view the highlighted differences in color. The program not only highlights the line that contains the difference, but also the individual change, down to a single character. You can the selectively transfer changes from the left to the right or vice versa and have full control and freedom of text editing.

One of the main differences of Visual Сomparer from other similar programs is its full-function text editor. You can copy, delete, find and replace the text in Visual Сomparer as you did it in any other text editor. All these possibilities are realized in comparison panes. Each pane represents the content of one file being compared, allowing its edition and merging of different blocks with the other file. 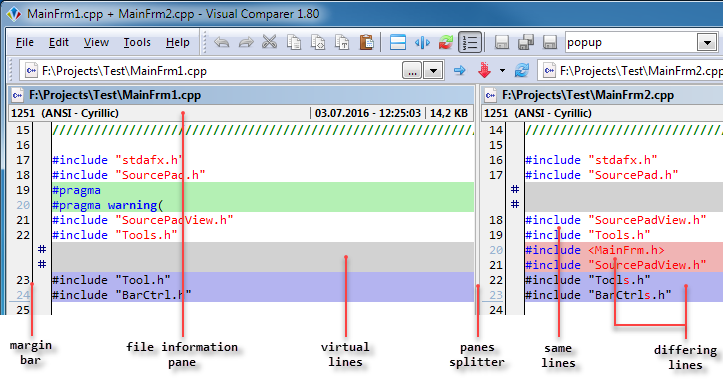 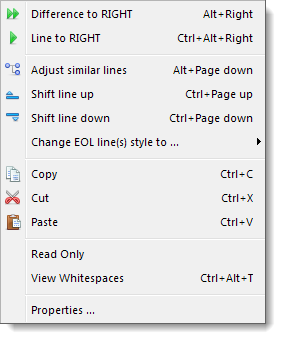 Each Comparison Pane has its pop-up menu that include some often-used commands. To activate the pop-up menu simply click the right mouse key in edition area. The commands activity depend on the place of activation in the comparison pane. For example if you click on the block of differences, in menu will be accessible merging commands.

If you frequently use commands that are not present in the popup menu you can expand or change it. Visual Comparer supports an adjustment opportunity of context-dependent menus and tool panes.


To make recognition of file differences more convenient and increase your productivity during comparison Visual Comparer has a number of additional actions with Comparison Panes, namely:

The full-functional text editor does line comparing and allows to carry out additional editing of the text while matching. It is done as conveniently and easily as in the usual text editor.

'Search and Replace' makes possible for you to search for and replace specified text in the current pane of Visual Comparer and support regular expressions. Find/Replace dialogue works in modeless mode. Therefore you can not only make find and replace but also make editing of the text during of the find and replace. 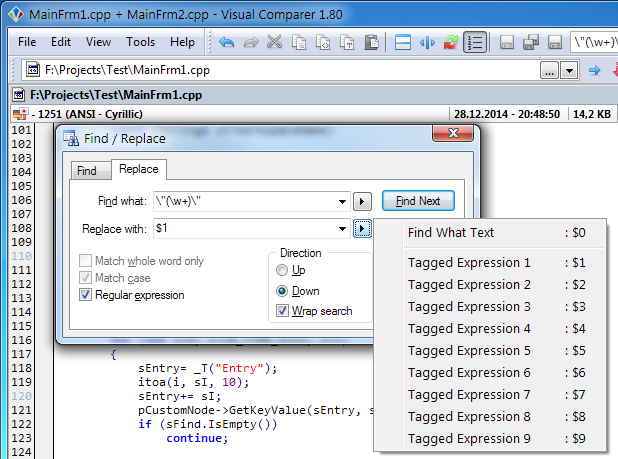 The majority of modern text editing tools possess a syntax highlighting feature of various programming languages. Visual Comparer has this feature as well. 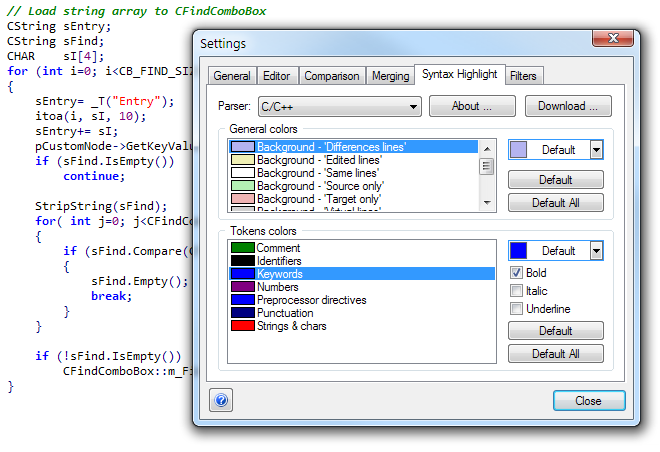 You can also reallocate lines in a separate block of differences ("Adjust similar lines"). This feature is based on the "lines similarity" concept: 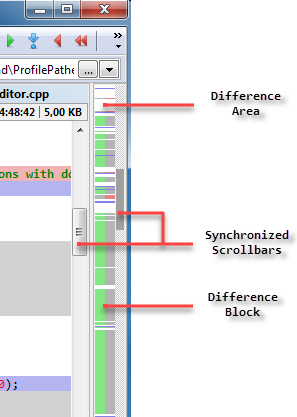 For convenient moving and full scope of file differences Comparison Map is intended. It consists from area of differences and scrollbar. Using Comparison Map, you can move quickly through the differences. You can do it both with help of scrollbar and direct cursor positioning. Simply click on required difference area to see necessary difference block.

Navigation by differences with synchronization feature

We recommend use keyboard shortcuts to move between differences and they synchronization.
It is more efficient and convenient than using the buttons located on command toolbars. 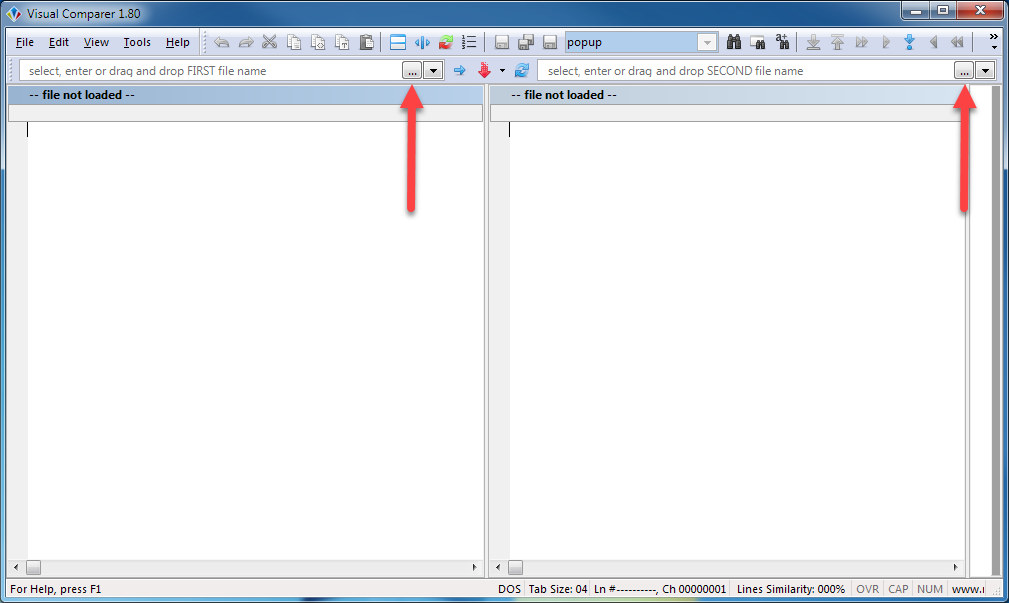 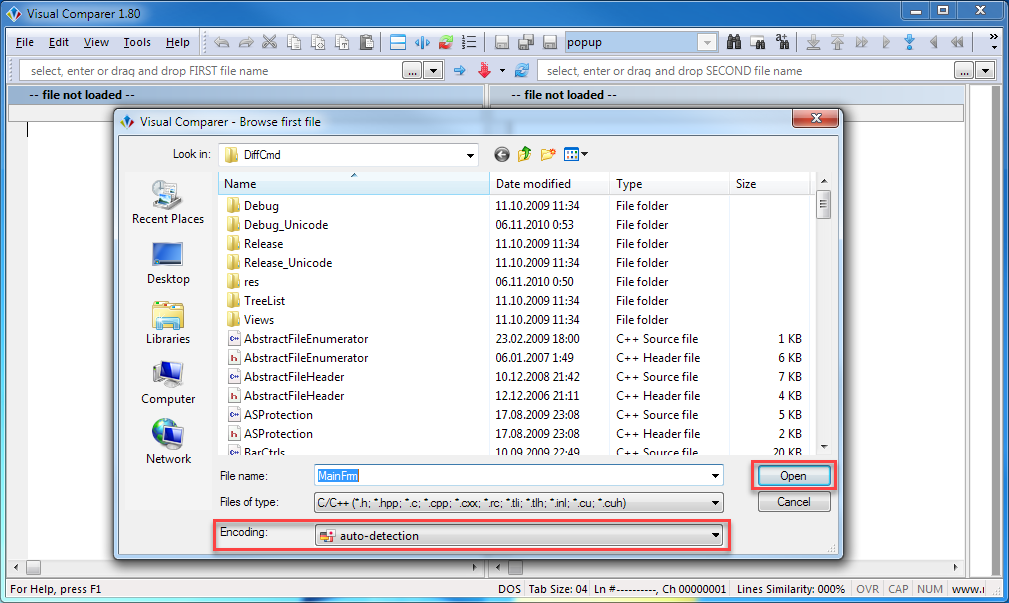 This is typical 'Open File' system dialogue. Here you can also select which code page will be used for the opening of selected file.
After the first file is selected, repeat it all for the second file. 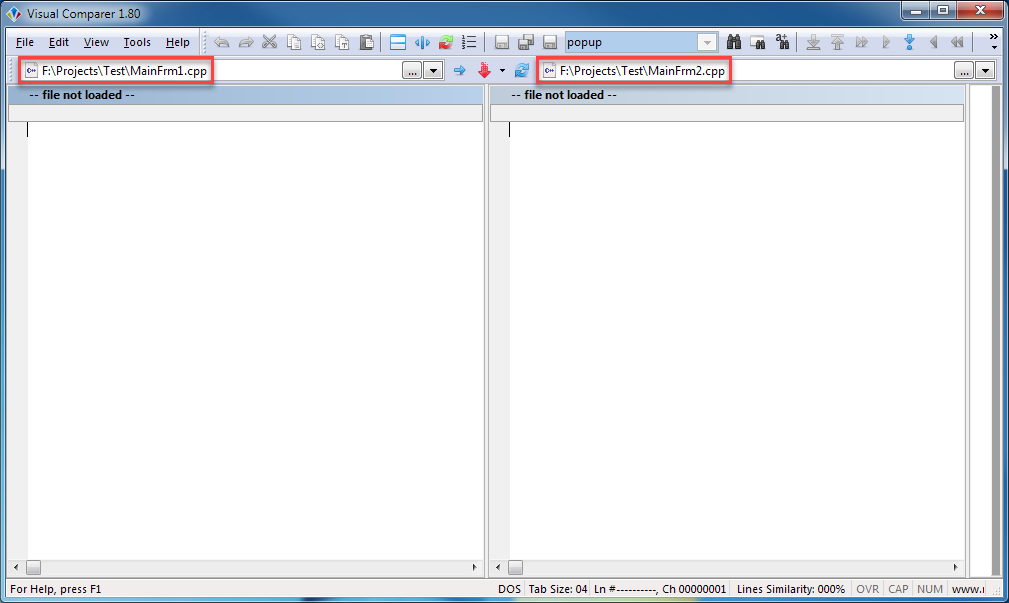 Source and target files now selected. We are ready to start the comparison of our files. 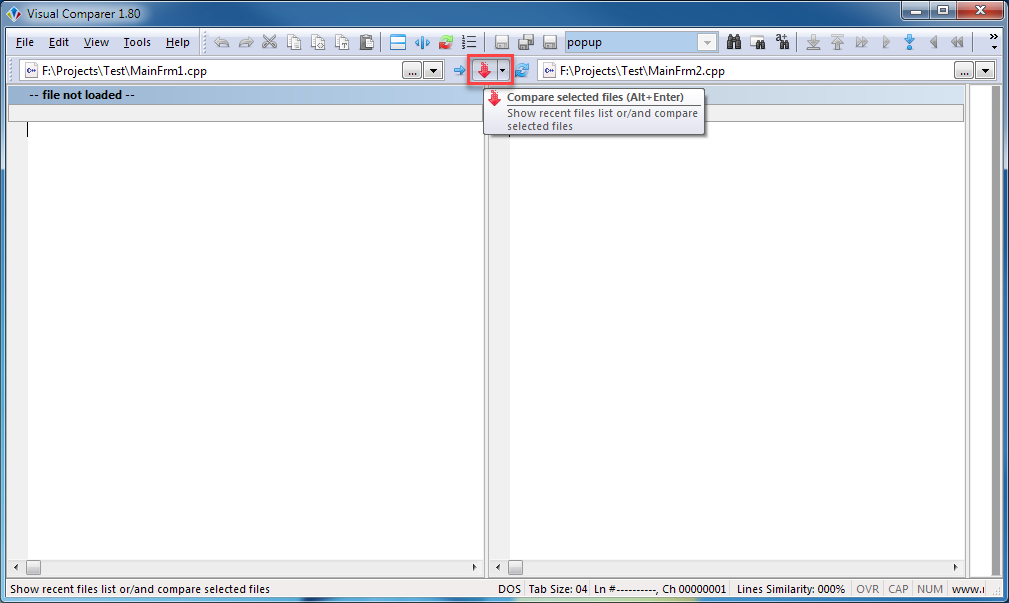 Press on the icon with red arrow to starting ... 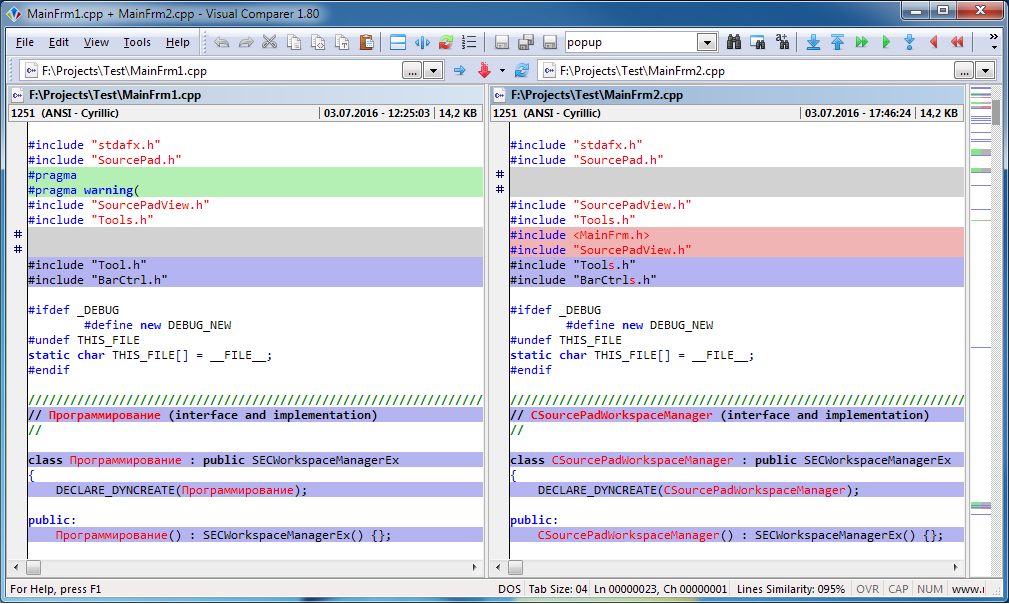 After comparison, Visual Comparer will display all differences between two files. 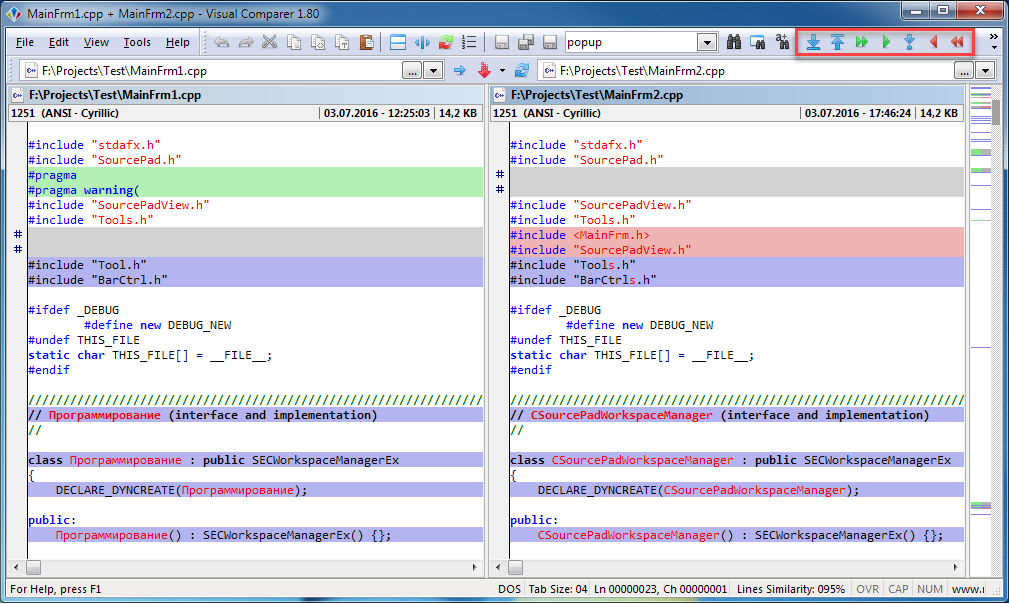 To navigate between difference blocks you can use appropriate commands on synchronize toolbar. We recommend use keyboard shortcut combinations to move between differences and they synchronization. It is more efficient and convenient than using the buttons located on command toolbars. 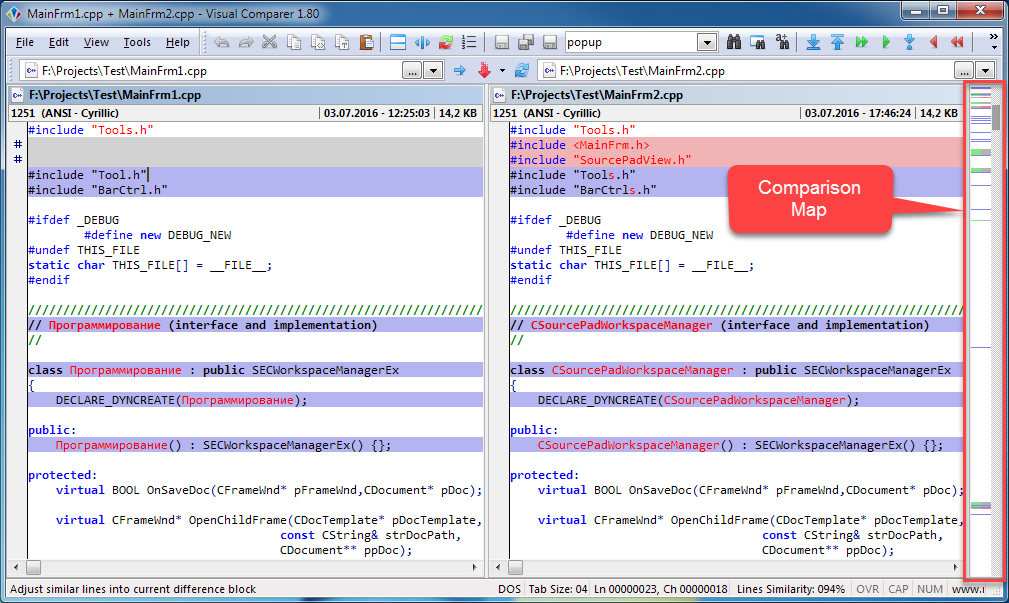 On the right side of main window you can see comparison map. It combines both functions: general review of all differences in both files and quick navigation between them like the usual scroll bar. 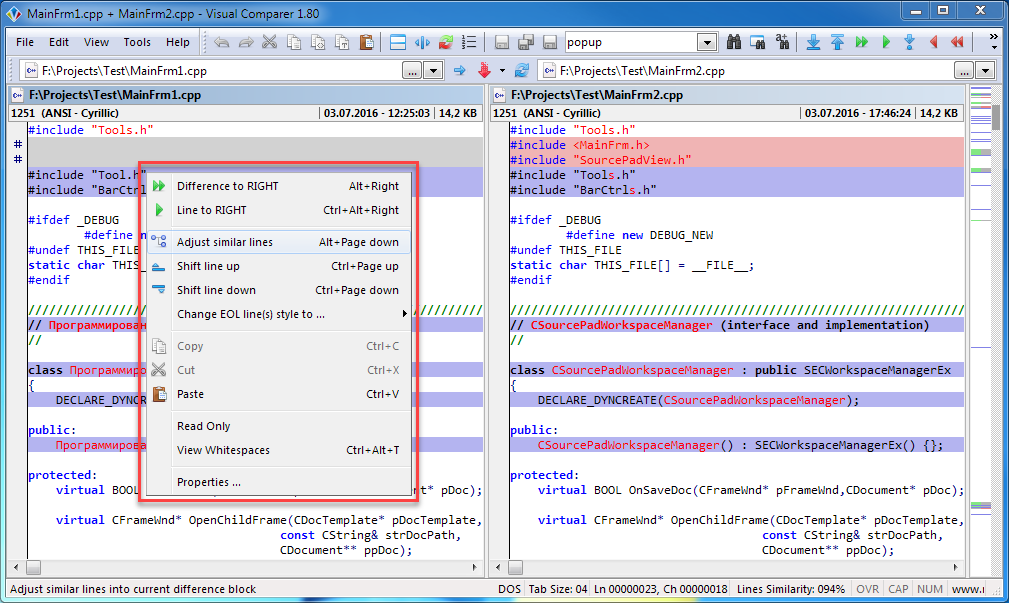 Other useful functions can be accessible throught context menu on each comparison panes. 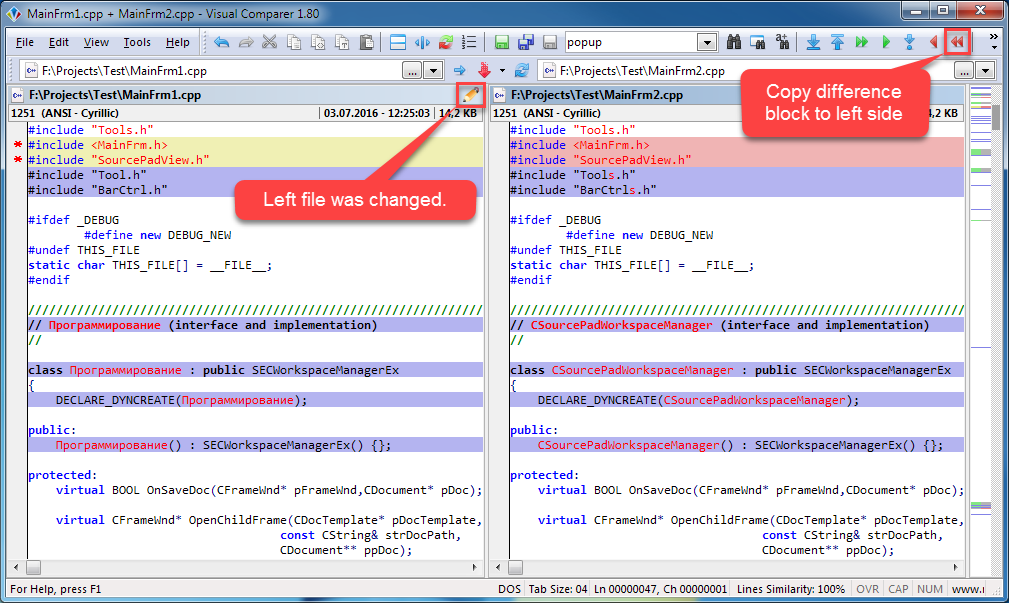 Of course, you can transfer differences between files completely as well as selectively. 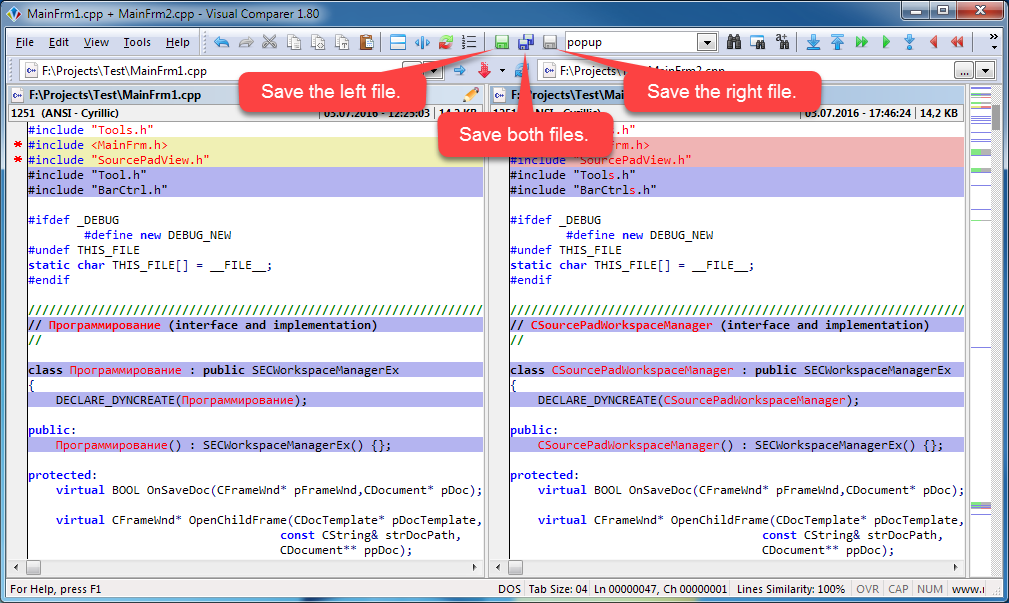 If you sure that all changes between files is done, you can save changed files back to the disk. 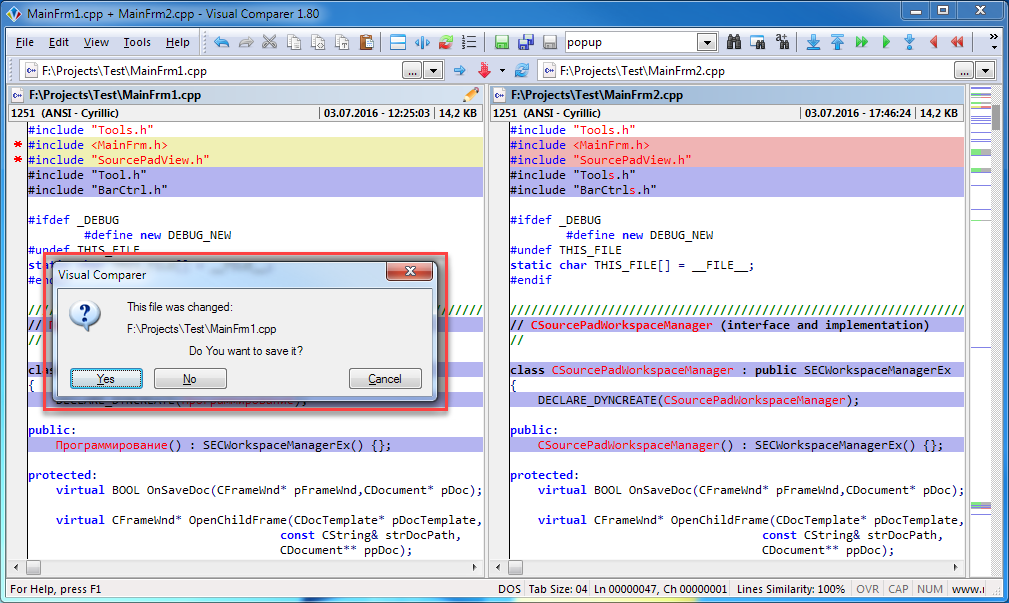 If you try exit from Visual Comparer without saving, you will be asked about need to save changed files back to the disk or not. 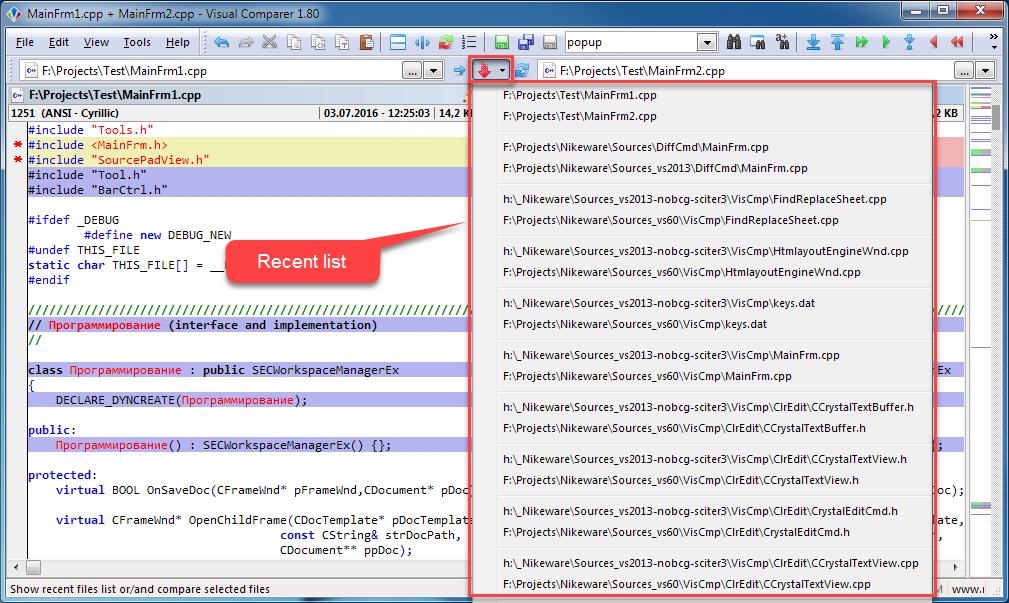 During of the working with Visual Comparer all names of files collected as comparison pairs in general recent list and can be accessed later. 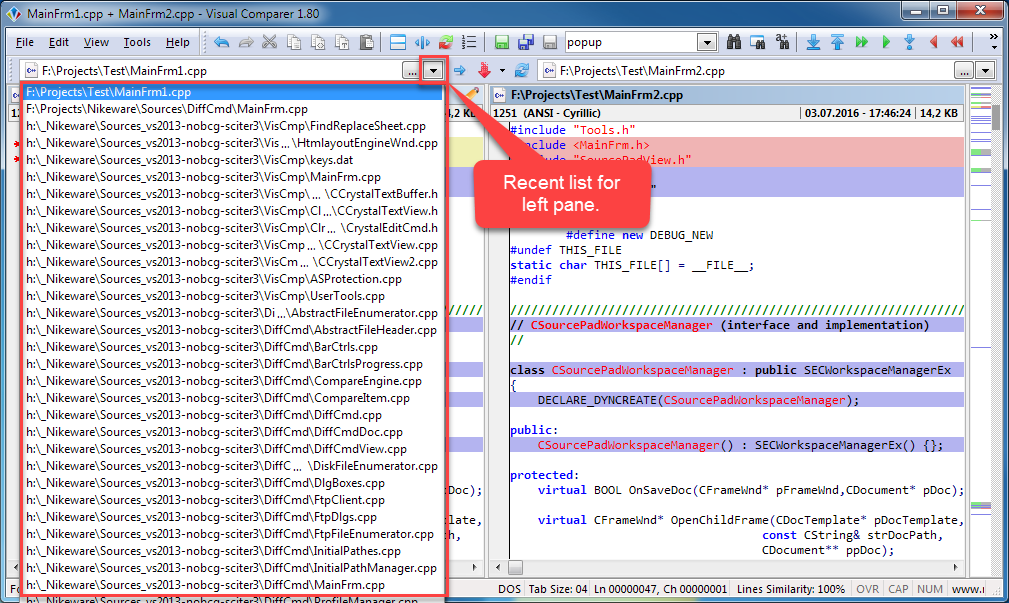 Each file selector combo box also have own recent list.

Thank you for watching!
We hope that our products will help you with your daily work.

To highlight lexical terms in various programming languages Visual Comparer uses such a concept as Parser. Lexical highlight parsers are realized as external plug-in modules. Each module (file) contain a collection of parsers and have .prs extension.

Visual Comparer already has by default the syntax highlighting that located in nikeware.prs file with following programming languages:

How to install new parsers: